The migration safari kicks off early morning, at 8am on the first day. You will be picked up from your hotel in Arusha and head towards the Ndutu region. The drive to Ndutu is about 5.5 hours covering a distance of 260 Kms.
Two hours after commencing the drive, you will enter the Ngorongoro Conservation Area (NCA) where you will notice the landscape changing from hilly forests to plain and green grasslands.
Once you reach Ndutu you will begin a half day game drive with a convenient stop for your picnic lunch. Sweeping grasslands cover the region which gradually fades into the Serengeti. 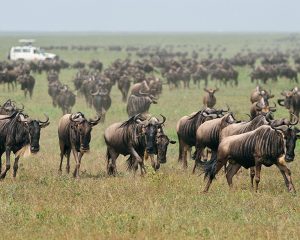 Ndutu forms a part of the route for the annual migration of more than 2 million wildebeests and thousands of zebra, antelope and gazelle. During game drives at the right season between December and April, you will be able to see the fertile plains turn into calving grounds and nursery for the great migration.
This season attracts hordes of predators prying on vulnerable young wildebeest. Crested with Ndutu Lake and Lake Masek, these waterholes offer plenty of wildlife game during the dry season.
The Ndutu is also the home ground for 6 species of big cats leopard, lion, cheetah, caracal, serval and wildcat. The action-packed game drive will end late in the evening by around 5PM.
You will now head towards your choice of accommodation, where a freshly prepared dinner awaits you. Ensure you get some good rest and recharge yourself for another eventful day.
Dinner and overnight at: Ndutu Lodge

After finishing up a good breakfast, you will head out towards the Serengeti National Park and travel in the midst of the never ending plain grasslands.
Serengeti means endless plains in the local African language and watching the grassland stretch out as far as the eye can see and eventually merging with the sky at the horizon is an absolutely breathtaking view.

With an overall land area of 14,763 Sq Kms, It puts our notion about distance to shame. The Serengeti also houses the glorious “Big 5” (elephant, rhino, buffalo, lion and leopard). Along with the “Big 5”, a very pleasant sighting would be one of Africa’s most beautiful animal – The Impala.
The Serengeti ecosystem supports the greatest remaining concentration of plains game in Africa. You must also look out for the Serengeti “Kopjes” which are massive boulders of granite standing in a sea of grass. They provide ample shelter to a large variety of flora and fauna.
A picnic lunch will be done during the day long game drive itself. 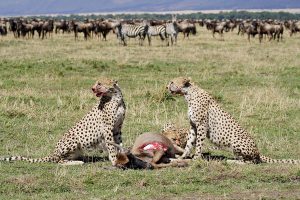 In the morning, at 7am, you will head out for a short game drive in the Serengeti after a good breakfast. After completing a half day game drive along with a picnic lunch, we will branch out and head towards the Ngorongoro crater rim.
The 75km drive to Ngorongoro Crater rim will take about 2.5 hrs, with mild game action to see on the way. The crater is one of Africa’s impressive geological attraction and supreme mecca of wilderness. The day comes to an end with a heavy dinner and a good rest in your choice of accommodation. Get a good rest and refuel yourself, for the following day you will descend into the massive crater.

On this day of your safari, you will have an early start. Finishing up with a quick breakfast you will make an early descend at around 6:30am into the crater floor.
The Ngorongoro crater is the world’s largest inactive, intact and unfilled volcanic caldera. It has a massive floor of about 260 sq kms with a depth of over 2000 feet. The 5 hour game drive in the crater floor, will show you a lot of animal action. Keeping the camera ready is definitely recommended. The African elephant, buffalo, Black rhino, Hippos, Hyenas, Cheetahs and Lions are found in plenty. Post the picnic lunch at the beautiful Hippo pool, you will begin a steep ascend to the top exit of the crater.
This is the last leg of your safari, with a 4hr drive left to Arusha. You will be dropped off to your preferred location at Arusha by 6PM in the evening. With an incredible experience and loads of memories to cherish, this is the time you bid goodbye to your team.

Give us a call or fill in the form below and we will contact you. We endeavor to answer all inquiries within 24 hours on business days.
+255787 328 058
info@dendeatzsafaris.com
Translate page »
error: Content is protected !!
WhatsApp us